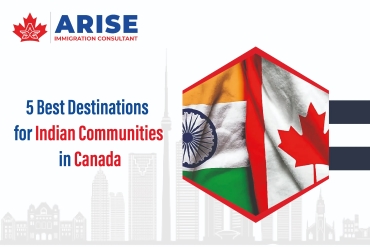 Since a century, Indians have been a large part of population of Canada. The census data reveals that in 1904,there were around a million Indiansresiding Jn Canada. The sikh community being the major part of it. While, in 2016 census around 670,000 indian citizens have settled in Canada as permanent residents. In addition to this, a huge number of temporary work permit holders will also be transitioned into permanent residents. Collectively, the entire population of Indo-Canadians count up to the population equivalent to the capital city Ottawa.

Although Canada welcomes every Indian with a pleasing gesture and every city has several Indians residing, still there are some cities which prove to be popular for Indians.

Canada has ten provinces and three territories that have many cities within them. All these regions offer best facilities to indian immigrants, but, some countries prove to be comparatively better than others for Indian communities.

The largest city in Canada is the provincial capital of Ontario. It has a population of around 3 million people. Toronto comprises a diverse culture as people from various countries come here for studies, work, etc. It offers plentiful economic opportunities to new entrants as it is the center of many Canadian industries. The Greater Toronto Area (GTA) is renowned for Canadian startup companies. Therefore, Toronto is known as Canada's economic engine. Some of the top universities also add grades to Toronto. The lifestyle here is highly busy and fast. As Toronto is a huge city with several companies, there are immense opportunities for immigrants to get a professional job here. Tech masters can get a high paid job here. Toronto has industrial banks and stock exchange companies, hence there are large number of opportunities in banking also. Apart from this, for Indian immigrants there are opportunities in telecommunication, retail, security and education sectors.

– Ottawa is the capital of Ontario. It is situated in the eastern part of southern Ontario. The top five universities in Canada are located in Ottawa. This city is considered as the most safest of all, as the crime rate is very low. Resultantly, it is the best-suited place for new indian immigrants. English and French are the most popular languages being spoken here. The economic strength of Ottawa being tourism, technology and public sector. So, there are endless opportunities for indians in these sectors.

this city has many renowned universities. The quality education here helps international students in up killing themselves. The weather here is moderate which helps people escape from the extreme temperature. Hence, the productivity at work is high. Althroughoit the year there is ample of snow which lets people enjoy various snow sports. Quality transportation, healthcare services also acts a magnet for new immigrants.

It is the third-largest urban area in Canada. Calgary is better known for its green efforts wherein, they are making use of green energy resources to fulfil their energy consumption requirement. The beautiful sight of snow during winters is a treat for eyes. Indians here have opportunities in tourism, financial services, health, creativity, financial services, etc.

This destination has large oil reserves and hence known as the oil hub of Canada. This calls for several opportunities in construction, engineering and energy sector. Both summers and winters are well enjoyed here. Summers receiving ample of sunlight and winters witness chilling temperatures. On the whole, business opportunities, quality education and economic cost of living makes Edmonton one of the best choices for Indian immigrants.

Depending on the job opportunity and education to be received, people can select the above-mentioned destination for putting up as new immigrants. These places have high concentration of indians. Thus, people enjoy a feeling of brotherhood in a country away for their country. New immigrants get easily adjusted in the new home in Canada, as Canada welcomes immigrants warm-heartedly.