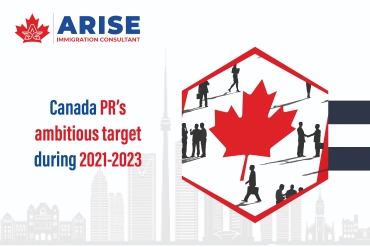 Every year, the Immigration Levels Plan has become the most critical announcement made by the Canadian government. This plan specifies the number of additional permanent residents that the country will accept under various classes. Family, economic, humanitarian and compassionate grounds, and refugee are few categories under which immigrants are welcomed.
Canada’s immigration target was set to 341,000 for the year 2020. However, the numbers fell short due to the ongoing pandemic. As a result, this year Immigration, Refugee and Citizenship Canada (IRCC) have proposed the most aggressive immigration levels plan in its entire history to make up for the drop.
All through the pandemic, it has held Express Entry draws, which may result in the country exceeding its Express Entry record this year. At the same time, the Provincial Nominee Program (PNP) draws are also going on.
During 2021-2023, Canada aims to create history. The number of immigrants targeted for 2021 is 401,000, 2022 is 411,000, and for 2023 it is 421,000. The Immigration Plan for the years 2021-2023 aims to accept about 60% of all newcomers through programs such as Express Entry and the Provincial Nominee Program (PNP).

To offset the negative financial and economic consequences of its low birth rate and elderly population, Canada maintains high immigration levels. About 18% of the total population comprises of people aged 65 and above. Furthermore, Canada’s birth rate is extremely low at 1.47 births per woman..
As a result, Canada may face potential problems in terms of economic growth and government spending. This crisis can be mitigated by allowing in more immigrants. New immigrants would make a major contribution to the working population and economic development.

Let’s take a look at some important takeaways from this ambitious immigration target.

The highest target for immigrants

Over the next three years, i.e. till 2023, Canada aims to welcome over 1.23 million immigrants. The last time Canada accepted more than 400,000 refugees in a single year was in 1913, when 401,000 people arrived. It’s never come close to matching this number since.
Immigrant enthusiasts and aspiring applicants awaited the effects of the pandemic to see if it will result in a decrease in Canada’s immigration rate, but that isn’t the reality. Furthermore, these figures only include new permanent residents. Each year, hundreds of millions of temporary residents such as workers, students, and tourists continue to arrive.

Increased focus on economic class
Traditionally, the aim of the new immigration policy for the Canadian government is to attract the best talent in a dynamic international economy. Economic immigration routes that promote skilled individuals and families, such as Express Entry and the Provincial Nominee Program, will account for nearly 60% of new PR’s. This is consistent with the country’s immigration plans over the last few years.

Increased target on family sponsorship
Citizens and PR’s of Canada frequently sponsor their spouse, dependent children, and common-law partner for immigration to Canada. Family reunion has long been a cornerstone of Canadian immigration policy. Hence, it’s no mystery that the goal of 80,000 new entrants per year remains high.

Immigrants from India
India have always been the leading source of PR in Canada since 2017. The following years saw a significant increase, with a leap of more than 20% during 2018-2019, establishing a new high. As per the new plan, most of the new entrants would be in the economic class, which has lately been occupied by Indians. Additionally, there is a spike in Indian students enrolling in Canadian universities.

Canada has long been viewed as one of the best countries in the world for standard of living. Good governance, education reform, public health, and economic stability have all been high points for Canada. Because of these attributes, the nation has become a very prominent destination for immigrants and businesses from all over the world. The country now has a very mixed culture as a result of its open immigration policy.
The most popular target category of newcomers is economic immigrants, especially young, highly trained, and qualified professionals. This is an excellent opportunity for foreign workers from all over the globe to apply for permanent residency (PR) in Canada. PR in Canada is a prerequisite for being a Canadian citizen. With its ambitious immigration plan during 2021-2023, the country attempts to use immigration to help the economy rebound from the effects of COVID-19 while also balance the possible fiscal consequences.
In the coming years, Canada will welcome thousands of foreigners. To learn more about Canadian immigration or to get advice on which immigration path to take, contact us today.