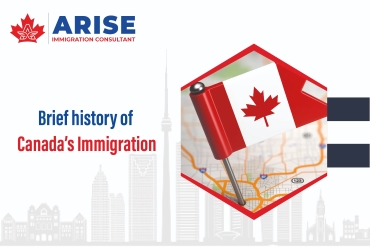 The vibrant immigration history of Canada began with the very first immigrants from England and France. The country became a ‘land of immigrants’ and was shaped by the efforts of people who migrated to reside in Canada.

Canada’s very first Prime Minister, Sir John Alexander Macdonald, was an immigrant. Born in Scotland, he moved to Upper Canada when he was a child. There were only four provinces in the country at that time – Nova Scotia, Ontario, New Brunswick, and Quebec. The other territories and regions were added in the later years.

During the period 1867 to 1914, immigration was encouraged, especially for people acquainted with rural and agricultural lifestyles. Significant developments in Canada stimulated population growth, including the development of the transcontinental railroad, making travel and transportation easily available. Thousands of multicultural immigrants, including French, Romanians, Ukrainians, Hungarians, Icelanders, and Chinese migrated to pursue better living standards and job opportunities.

From 1928 to 1971, Pier 21 was the main entry port for immigration in Halifax, Nova Scotia. It is a National Historic Site and is Canada’s only remaining seaport immigration center. At present, the Canadian Museum of Immigration is located at Pier 21, and hosts documentaries, archival photographs, and thousands of books about the history of immigration in Canada.

In 1937, John Buchanan, the Governor-General of Canada allowed the immigrants to retain their identity contributing to the national culture. This principle was carried on in Canada’s Multiculturalism Policy declared in 1971. This demonstrates that the country respects the importance of diversity and affirms the integrity of all Canadian people, irrespective of their race, origin, religion, or language.

Canada also provides all children below the age of 18 with free education. This is up to Canadian high school education, i.e. for primary and secondary school studies. Sending your kids to reputed schools that teach innovative courses and all this for free may be a defining moment for the future of your family.

Besides that, the Canadian government also offers higher education subsidies for students. This is done to ensure that you and your family get the benefit of higher education and enjoy a good quality of life.

In the early 1990s, the country paved the way for other migrants with substantial financial capital and employable skills. People with the required skills and resources to start or invest in a business within the country were encouraged to apply for Canadian immigration. With all these measures, the aim was to increase employment opportunities and generate wealth in Canada.

This proved to be a success. The country saw a significant increase in the number of business migrants and entrepreneurs. A significant portion of the business class migrated from Hong Kong, making Canada a leading destination. In larger cities such as Toronto and Vancouver, where the Chinese community now comprises the primary immigrant group, the migrants from Hong Kong and other Chinese group is widely observed.

Canada is well regarded as one of the most attractive countries in the world to live in. Hence, the influx of immigrants to Canada is very high. Canada accepts more migrants on a per capita basis than any other country in the world.

The higher levels of immigrants are intended to ease Canada’s fiscal and economic stresses caused due to the low birth rate and older population. Over the next decade, over nine million Canadians will cross the age of retirement, which suggests that the country will become far more reliant on immigration to sustain a stable economy and workforce.

Immigration is an integral part of humanity’s evolution and has shaped the course of history profoundly. Recently, the number of migrants to Canada has grown significantly and is expected to grow further year on year. Based on its popularity as an economically secure, politically moderate, and multi-cultural society, many people chose to migrate to Canada. The majority of immigrants to the country are from the Philippines, India, and China.

There are many benefits of migrating to Canada and they are likely to make a positive impact on every person or family’s living standards. Access to quality education, an advanced healthcare system, a healthy and clean atmosphere, and tremendous job opportunities are some of the benefits. Contact us for more information on the Canada immigration process. Our expert team will guide you through every step, thus making the whole process trouble-free.

According to the 2020 Global Peace Index, Canada holds the 6th position on the list of safest countries in the world. As a permanent resident, you can be confident that you and your family will be safe in Canada throughout your lives.

Canada is recognized as a multicultural and welcoming community that embraces immigrants from all over the world proudly. More than 1 in 5 individuals residing in Canada are actually immigrants and almost half the population in Toronto city comprises of first-generation immigrants.

If you want to get Canadian citizenship, gaining a permanent resident is only the first step. You will be able to become a Canadian citizen after you have physically lived in the country for three out of five years.

Your status as a permanent resident cannot be removed unless you break a law or you fail to perform your duty of citizenship. For two out of every five years, all permanent residents must remain in Canada, or they will not be able to renew their status.

As a Canada permanent resident, you can start your own business with sole ownership, corporation, or partnership. You can also invest in a franchise, even if you are not a Canadian citizen.

While several nations around the world are building barriers and restricting foreigners, Canada continues to welcome immigrants. The country offers multiple attractive benefits and support facilities to its immigrants and their families. Good standard of living, a booming economy, free education and healthcare, employment opportunities, etc. are some of the benefits you can avail yourself as a permanent resident. If you are looking for a community in which you and your family feel accepted and safe, Canada must be your preferred destination.